What is a Wendigo? An Algonquian Legend 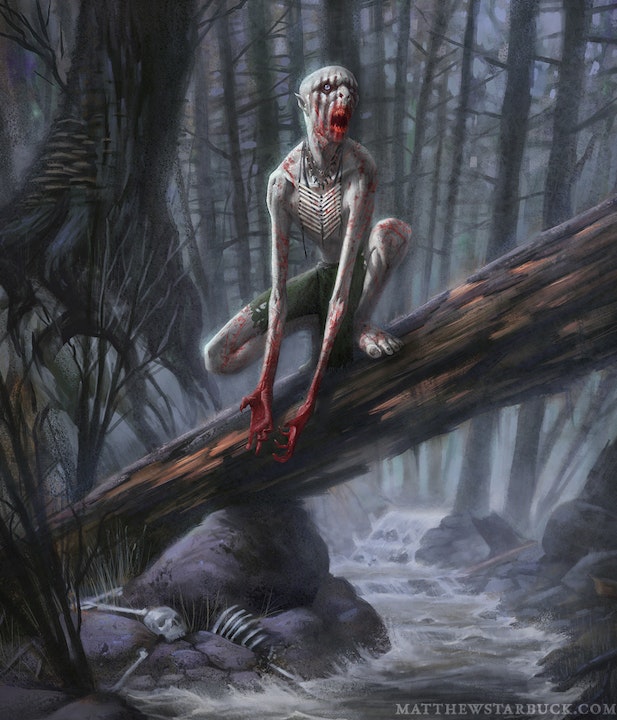 The Wendigo has been referred to by multiple different names, including Witigo, Witiko and Wee-Tee-Go, and all of these names roughly translate to the same thing, "The Evil Spirit Who Devours Mankind." Scary right?! Its appearance is just as fitting.

As described by an Objibwe teacher and scholar from Ontario, Basil Johnston, "The Wendigo was gaunt to the point of emaciation, its desiccated skin pulled tightly over its bones. With its bones pushing out against its skin, its complexion the ash-gray of death, and its eyes pushed back deep into their sockets, the Wendigo looked like a gaunt skeleton recently disinterred from the grave. What lips it had were tattered and bloody.... Unclean and suffering from suppuration of the flesh, the Wendigo gave off a strange and eerie odor of decay and decomposition, of death and corruption."

Further descriptions of the Wendigo describe it as being a tall boney humanoid looking creature. It features limbs stretched longer than any other human, and at the end of its arms it has elongated fingers stretched into claws. It is said that it's face is absolutely terrifying to look at, and that it's teeth are jagged and pointed. Commonly the Wendigo is missing its lips due to its unsatisfied hunger for human flesh, turning to its own body in an attempt to fill its bottomless pit of an apatite.

The Wendigo's elongated limbs and claws let it scale the tops of trees and walls with ease. It moves extremely fast and silent. Some stories depict its stature of a towering 15 feet in height, and according to legend a Wendigo starts at the height of an average man and with each person they consume they grow in size.

Even though the appearance of the Wendigo sounds god awful, in my opinion this is the least of their scary traits. Depending on what stories you have read, it is said that the Wendigo is able to attract its victims by imitating human voices. They don't just imitate any human voices either, they uses a voice that you are very familiar too, your family or friends. This strategy used by the Wendigo is an attempt to lure its prey deep into isolation of the dense forests they roam.

WHERE IS THE WENDIGO FROM?

In Algonquin speaking peoples, their Native American traditional belief system includes stories of the Wendigo. It is commonly referred to as a malevolent, cannibalistic, supernatural beast and is strongly associated with winter, coldness, darkness, the north, famine, and starvation. To even speak of or mention the name "Wendigo" is considered to be bad luck to these Native Americans and for good reason.

The Wendigo is said to devour the Native Americans who dared to enter the forests of the Great Lakes Region. There have been sightings of the Wendigo spread across the upper colder parts of the United States and into Canada. There are also multiple different areas across the parts that feature Wendigo with in its name. An example of these places is Lake Windigo in Northern Minnesota, United States. Lake Windigo is located on a island known as Star Island, within the state.

It is believed that there is a Wendigo that lives with in with in Lake Windigo on Star Island, and for those who venture to close they are pulled beneath the waters surface into its darkest depths, never to be seen again. In the book "Wendigo Lore" the author Chad Lewis tells a story about a group of Native Americans who visited Star Island to hunt. While the women tended camp, the men hunted the surrounding areas of the island. After an extended period of time the men would not return and the women grew anxious waiting for their return. The women decided it would be best to search for the party. They would end up finding the bodies of the men, their husbands, hung from the trees and skinned.

The story and idea of the Wendigo is very popular in pop culture, and why wouldn't it. The Wendigo is a horrible sounding creature and the perfect antagonist in any scary movie or horror story. As I have, I am sure you have seen the Wendigo or a representation of one in a movie, on tv or in a video game you might have played. The following are some examples of where you might have laid your eyes upon one.

In Stephen King's book/movie "Pet Sematary" the spirit of the Wendigo reanimated what ever was buried with in the cemetery. It started with a man named Timmy Baterman who was killed during WWII and when he was sent back from Italy and his father buried him with in it. Leading to him coming back to life, possessed by the influence of the Wendigo.

In the highly popular TV show Supernatural the second episode of season one features the Wendigo. Sam and Dean Winchester visit a place known as Blackwater, where like clockwork every 23 years people go missing. When in Blackwater they visited a man named Shaw who was a survivor of an alleged bear attack in 1959, but this bear he described was unlike any other. It was intelligent, displayed by its ability to unlock the cabin door his family and himself hid in, it roared like no other animal he had ever heard, and it moved like lightning. With some further investigation in their fathers journal, Sam and Dean quickly realized they were dealing with a Wendigo.

Until Dawn is a very popular interactive drama horror video game released in 2015. I myself have spent countless hours playing the game and trying to playout the multiple different scenarios within the game and accomplish trophies from completing the multiple different endings. In the game eight teenagers are staying in a cabin in Blackwood Mountain, and at some point they realize they are being stalked by a murderer. They do not initially know that it is a Wendigo, or what a Wendigo even is. This forces the group to survive "until dawn" when they can be rescued.