The Unsolved Disappearance Of Eloise Way 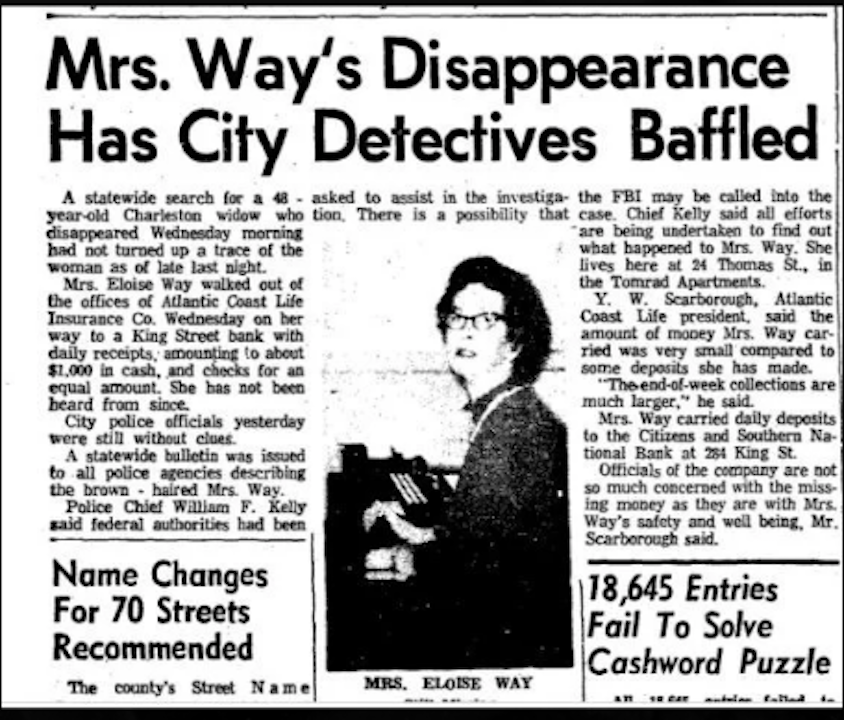 August 15th 2022 will mark the 60th anniversary of one of Charleston’s most puzzling disappearances. It is a case that has both horrified and captivated the residents of Charleston for decades and as the sands of time continue to fall, the answers to what happened to Eloise Way seem to drift with them. 48-year-old Eloise Way was doing her best to keep things running smoothly and life good for her two adult children. 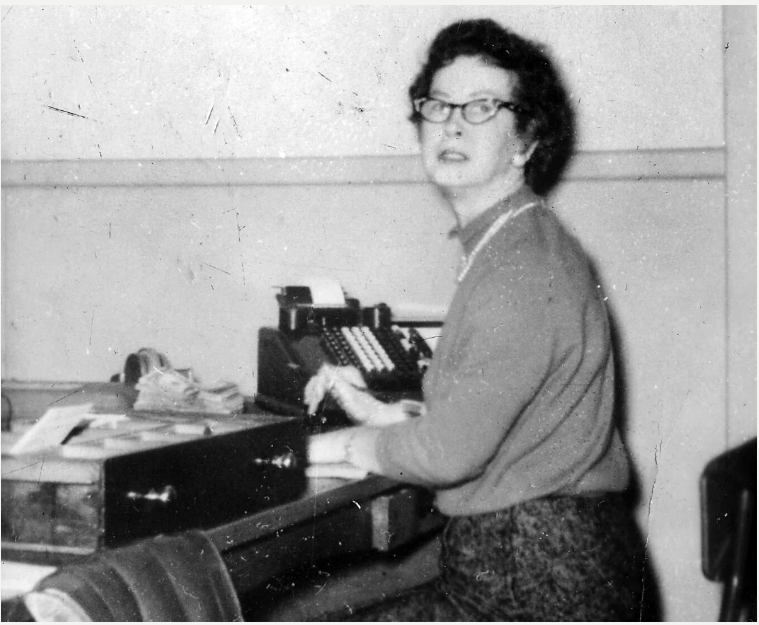 Eloise had been widowed, although the full details of when her husband passed are not available. After being widowed, Eloise continued to do what was best for her two children. Throughout the years, she had worked as both a bookkeeper and a secretary for the Atlantic Coast Life Insurance Company and at the time of her disappearance in 1962, she was still working for the company whose office was located on Wentworth Street.

Day in and day out, Eloise would arrive at work, set herself up at her desk and prepare for the workday ahead and August 15th 1962 was just another day at the office. According to the Charley Project, at around 10 am, Eloise folded up her bifocal glasses and placed them either on her desk or in her desk drawer for safekeeping. She bundled up the $1,000 in bills along with the coins and $729 in checks and told her co-workers that she was off to the First National Bank and the C&S Bank to deposit them.

This was a normal routine for Eloise, although she usually handled larger sums of cash, but her co-workers thought nothing of it and exchanged cheery ‘See you later(s)’. In total, Eloise was carrying around $2,196 which adjusted for inflation is around $20,630 in today’s money. She left the office on Wentworth Street and headed for the two banks which were a mere 4 blocks away. 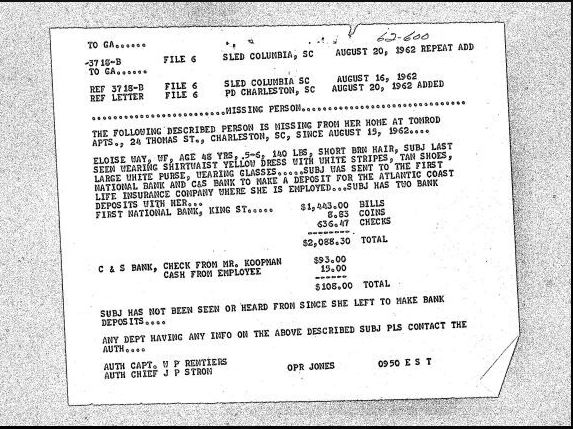 Somewhere between the Atlantic Coast Life Insurance Company and the banks, Eloise mysteriously vanished into thin air, never to be seen again. As the time ticked away and Eloise still hadn’t returned to the office, her co-workers called the bank to see where she was. The bank attendant at the other end of the line gave her co-workers some chilling news. Eloise hadn’t entered the bank that day.

After waiting for four hours, hoping that Eloise would rush into the office, they called the Charleston Police Department and officially reported her missing. Panic and worry filled the air as police officers filed into the insurance office. They looked over Eloise’s desk and found her glasses and lunch neatly tucked away, but there was no indication of where Eloise could have gone. Detectives from the Charleston Police Department began interviewing Eloise’s colleagues, family, friends and acquaintances but found nothing.

In a bid to help the investigation, Eloise’s daughter went to her apartment just a half a mile away from where she worked on Thomas Street and began looking for clues. Her daughter reported that nothing was missing, apart from the yellow dress with white stripes and tan shoes that she had worn to work that day. Everything was in order, clothes were neatly tucked away in her wardrobes and suitcases remained untouched.

Hours passed and each person who was interviewed said the same thing about Eloise, she was a polite and calm person and was considered to be a good and reliable employee. Following the death of her first husband, she had become engaged to a man from Brunswick, Georgia and the two had planned on getting married soon. Her daughter reported that Eloise didn’t even venture out of the house after dark and didn’t have a driver's license. Nothing made sense to investigators, how could she disappear in the 4 blocks from her office to the bank?

Eloise’s soon to be husband was from Brunswick, Georgia, was he possibly the mysterious man spotted talking to Eloise on the day of her disappearance? Perhaps that’s why she had so readily gotten into the car, not knowing it would be the last time. According to the Post and Courier who ran an in-depth article about the case, Eloise’s daughter came up with an interesting theory as to what happened to her mother. 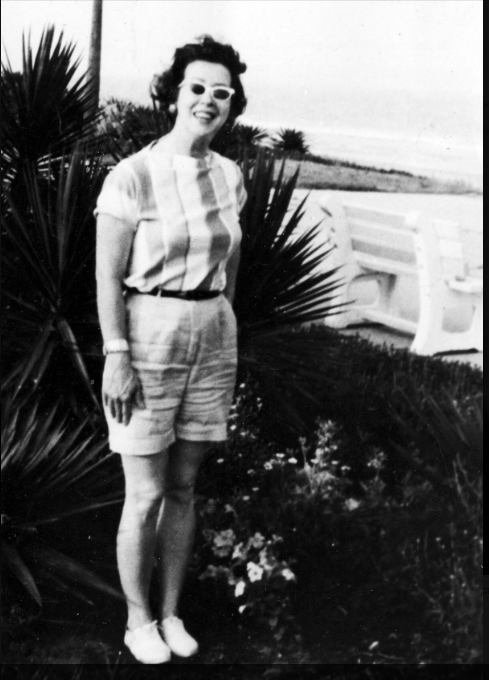 Her daughter, whose full name has not been released, believes that on the day of her disappearance, her mother was killed and buried on a dumpsite on Calhoun Street. The article states “Nearby residents and nursing workers had reported hearing screams on the morning Way disappeared. And one man claimed to have seen a long, dark car prowling the area around the time.” A nursing home was later built on this site and it does not appear that any remains were unearthed during its construction.

The Charleston Police Department followed every single lead to its end and almost 60 years later, we are still no closer to the truth. Even a $500 reward posted by her children in 1962 was not enough to get the right person to come forward.

The Charleston Police have not given up on Eloise’s case, but the passage of time makes it all the more difficult for new witnesses to be interviewed and new evidence to be gathered.

The FBI had also become involved in Eloise’s case and they too were unable to unearth any new information or uncover any leads that may point in her direction. Interestingly, the Post and Courier submitted a FOIA (Freedom of Information Act) before the publishing of their August 2021 article about Eloise’s case. This next piece is taken directly from the article. “To better understand the case, the Post and Courier submitted an FOIA act. Police were unable to locate the documents. Officials said they suspect it was lost, along with many other records from that period, in the massive floods that accompanied Hurricane Hugo in 1989. The newspaper also sought access to the FBI’s file on the case through a separate open-records request. The agency denied the request, saying that it could only release the file if Way had been declared deceased or had given her consent to sharing the documents. As she remained missing, the newspaper was unable to meet those conditions.”

Whilst the original case file is now presumed to have been lost, the FBI still hold records of their end of the investigation and there is still hope out there for Eloise and her family. Eloise’s daughter held her own theories of what happened to her mother and she wasn’t the only one. According to sources, Ronnie Way, Eloise’s son, believes that she had been abducted by a man who was suspected of robbing the Coburg Dairy in 1957.

Ronnie told newspapers that he believes his mother had befriended the suspect at a party with no idea that he was a very dangerous man. From there, Ronnie believes that as the two had met before, the suspect was able to get Eloise into his car before driving away. Others believe that the sum of cash Eloise had been carrying may have played a part, although Eloise often carried large sums of cash to the bank as part of her duties as a bookkeeper and secretary. 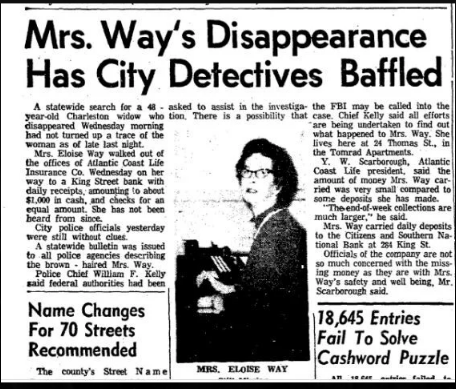 There are several rumors and theories swirling around in this case, but nothing concrete has ever been found. Unfortunately, Ronnie passed away in 2009 and it is not known if Eloise’s daughter is still alive. August 15th 2022 will mark the 60th anniversary of one of Charleston’s most puzzling disappearances and those who remember the case are still desperately searching for answers.

Eloise Way was last seen on Wentworth Street headed towards the First National Bank and C&S Bank on August 15th 1962. She is described as a white female with brown hair and she wore bifocal glasses. At the time of her disappearance, Eloise was wearing a yellow dress with white stripes, tan shoes, sunglasses and a large white handbag. Anyone with information is asked to contact the Charleston Police Department on 843-557-7434.

All images used in this blog posting are used for educational and awareness purposes and fall within the guidelines of fair use. No copyright infringement intended. If you are, or represent, the copyright owner of materials used in this video, and have an issue with the use of said material, please send an email to us at: creepyunsolvedmedia@gmail.com