The Legend Of The Gremlin Bells 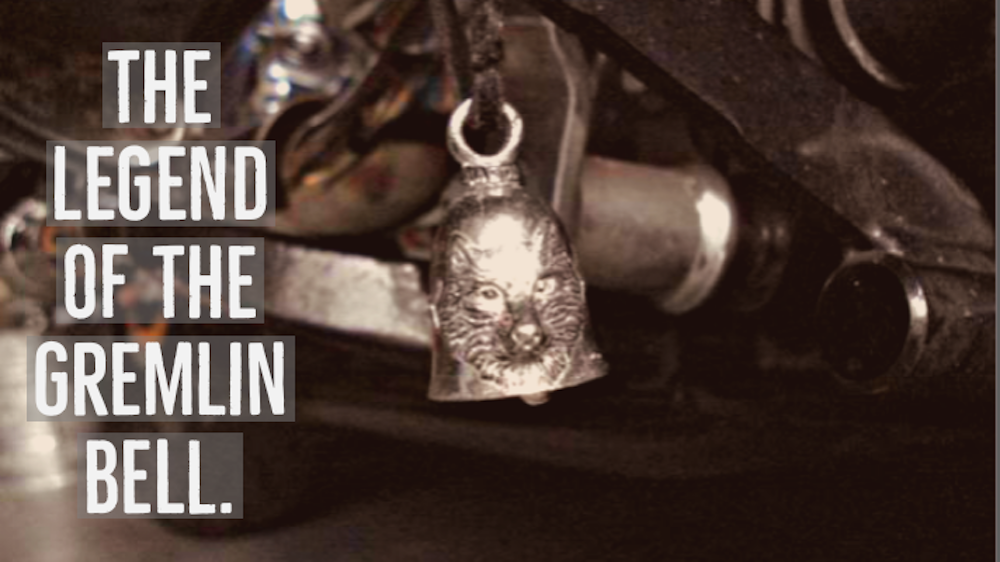 I was barely 21 when I rode my first Harley home and I was a novice to say the least. I had my riders permit for just a day and when the nice sales woman asked if I needed a crash course before I rode it home, I laughed and said I got this. I had ridden a few dirt bikes growing up so my shaky levels of confidence got the best of me as I put the bike into 2nd gear and attempted to accende the steep incline out of the dealership parking lot to head home. My friends laughed, before they told me to put it in first to make the climb.

I hit the highway, my friends followed close behind in my car. It was a crisp 40 degree day in April with a light wintry mix, I didn't feel a thing. I didn’t shiver or shake even once. My face was formed into the widest smile I had ever held up until this point. I did it,  another life goal had been completed, I could put another check in the box on my bucket list. I own a Harley.

Flash forward a half hour later. I pulled into the driveway of my mothers house and while trying to be clever, pulling my bike onto the sidewalk I lost my front tire over the edge of the sidewalk resulting in my bike being tipped over into my front yard. The ultimate sin, I laid my bike down, I didn’t keep it sunny side up…

Okay, by now you're thinking what's the point, right? Well shortly after this, I received my “Guardian Bell”, “Gremlin Bell” or whatever you choose to call it. So what's the significance, well luckily enough I have not had a serious accident to date. Is this directly related, or did my skill set advance with more hours behind the bars on the open road? Was this my new found guardian from misfortune? Well depending on what you believe and if you buy into the tale of the road goblins and evil spirits, well there might be more than meets the eye.

It is believed that with every bell, comes new found protection against road gremlins and twice the protection if a bell is gifted to you. The story that is sold with every bell is usually the same. “On a dark night, long ago, a biker found himself faced with a long highway, although he seemed to be alone, he was unaware that this stretch of cold hard pavement was filled with road gremlins on each side waiting for their next victim. These gremlins were known for causing problems to unsuspecting victims' bikes or even causing them to crash! Depending on the story you subscribe to, our protagonist finds himself roadside eating gravel, after a pesky gremlin got the best of him.

As our friend brushes off the dust, and looks over his beloved bike, a mysterious figure appears out of the shadows and ties a bell onto his bike. He then proceeds to tell him “this will keep the gremlins away” before disappearing never to be seen again.

Many people believe that these gremlins and evil spirits are the reason why turn signals malfunction, gas tanks go empty, batteries die and a list of many other things. But when equipped with an extra layer of protection from the bell you are able to prevent many of these from occurring.

The idea is that the bell brings great protection to bikers all around by trapping nasty little gremlins and evil spirits inside, giving them a painstaking headache before spitting them back out into the wind.

So with all this talk of gremlins where did this idea come from?

It is quite possible that the stories of the gremlins originated from WWII, specifically within the Army Air Corps. Tales of a lone Knucklehead rider and World War II Veteran quickly spread about his battles with gremlins from his time serving as a crew member on a B42 bomber.

Like many others, he flew on continuous daily raids that played a great toll on his body and other crew members alike. These raids involved very early mornings, long daunting hours in the sky, and only being completed with heavy eyed returns home well after dark.

As you can imagine the nature of these missions alone were accompanied by great levels of stress, and to add to this, high levels of fatigue. Returning home from these missions pilots and crew members always had to be on high alert. Periodically they would watch as figures out of the corner of their eyes would scurry across the bomber's windows, or dance across the it's wings. Gremlins if you might….

With lack of well needed sleep and combined with damage taken on by German fighter planes and AA guns, it would appear as if gremlins were tearing these bombers apart piece by piece. This was enough to send chills down each crew member's spine and enough to send anyone in their right mind into panic.

What would you do if you saw something on the wing of your plane slowly tearing it apart?

The pilots and crew members devised a plan, and brought forth multiple different ways to combat their hallucinate generated enemies of the sky. These methods ranged from playing the harmonica and singing, all the way to hanging bells. Cowbells and dinner bells to be specific. Crew members hung the bells from the dashboard and well throughout. The idea was that the constant vibration of the plane would keep the bells jingling and this would ensure everyone was awake, and well, the gremlins were far away from the conscious mind.

Is it fair that we can agree that these gremlins may not be physical beings, but more or less the tricks the mind plays on oneself when we are so desperately in need of sleep?

I know I’ve spent way too many hours awake when I should have been asleep. We have all had the cues of our bodies telling us to get to bed. We have all had “heavy eyes” and have experienced the well known head bob. Personally I’ve fought off sleep late at night just trying to get to the end of a long drive. I’ve watched roadways transform into walls of trees, causing me to slam on my brakes only to be stopped in the middle of a wide open roadway. I’ve experienced expanded road lines so far that they overlap the ditch, and I’ve watched the shadows of the night toe the line and wave as I passed.