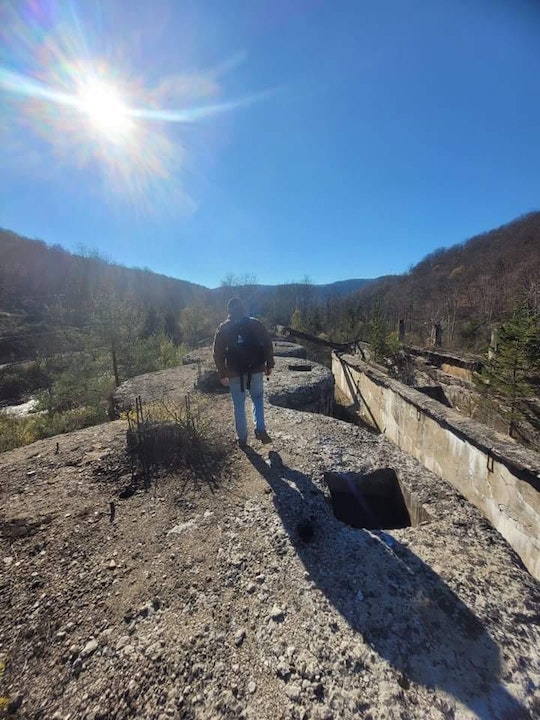 In the small town of Austin, Pa on Rugaber St (PA Route 872) sits a historical land marker. The yellow lettering inscribed on this dark blue backing, tells the short tale of "The Bayless Pulp And Paper Mill."

Growing up in the area it is hard to think of a period in time when this small town held a population in size comparable to our County seat.

Up the road, neighboring the ruins of the Bayless Pulp And Paper Mill, sits what is left of Austin Dam. Pictures and videos do not do it justice. You truly have to visit  to be able to embrace the actual size of these massive ruins. It too holds a historical marker of its own, and it really captures the tragedy at hand. I can only imagine the pure terror on each one of the town folks faces as they watched this massive tidal wave crash its way down Freeman Run headed in their direction. What could they have done other than hold steady and hope for the best.

“On Sept. 30 1911, the Bayless Pulp and Paper Co. dam broke here. This concrete dam built 1909, was nearly fifty feet high; 534 feet long. Its Failure sent torrents of water and debris down Freeman Run into Austin and Costello, causing great destruction and killing at least 78 people. This second worst single dam disaster in Pennsylvania inspired legislation (1913) to regulate the construction of dams in the state.”

This past weekend and something I plan to do more and more. I had the chance to visit the Bayless Pulp And Paper Mill ruins with my brother. I was able to live stream our complete journey through it from start to finish and it was quite the experience. It was like stepping out of our world and into another. The way that mother nature has all but taking back what was once hers is a sight to see. It was almost like being in a movie or video game, it reminded me a lot of the video game “Last Of Us” and we had others comment on our YouTube video comparing it to the dungeons in “Skyrim” or “Oblivion.”

We first visited what seemed like some sort of watch tower. It once held a ladder that carried whomever all the way to the top. It is covered with an abundance of graffiti “art,” my brother and myself pondered at the idea of how someone managed to get to the locations they did to paint it.

Moving on from that we followed a path through brier bushes and overgrowth to what could have possibly once have been the entrance. It hits you right in the chest, and the emotions felt probably vary depending on each person's connection to the building. I was overcome with excitement, I can’t say I’ve ever visited a structure of this kind of scale before, I was ready to explore from top to bottom. I could see how it could have been moving for many of the town folk especially the first few decades after the flood and then the fire. These events took away their friends, family members and livelihood.

We entered the building on what I believe was the first floor. Most of the building seemed structurally sound, but there were massive holes spread throughout the floor. It's dark, so if you go, bring good lighting and stay vigilant. We eventually found our way to the basement of the first building and the water ranges, from what I could see, 1 ft - 4 ft in depth. Because of the depth of water and being unprepared, this all but halted our exploration of the basement. I would like to return one day with headlamps and hip waders to continue the experience.

Moving on we climbed a sketchy staircase to the second and eventually the rooftop. Following this we found ourselves exploring, what we called the second building. It held what seemed to be massive holding tanks, that if one were to slip into they would succumb to mother nature… there was no visible way out.

I encourage anyone within driving distance to visit the Bayless Pulp And Paper Mill, it is quite the experience. If you do choose to visit, be very cautious. Have a plan. Do not go alone. Let someone know where you are going.

Watch out full exploration --> The Bayless Pulp And Paper Mill

See our Instagram page for some pictures of the trip. Creepy Unsolved