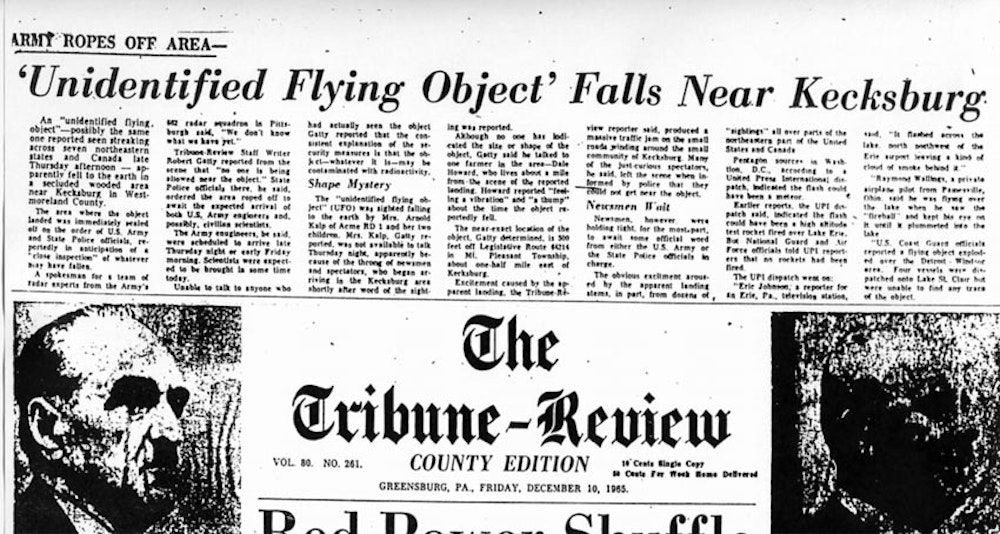 When you think of Aliens or UFOs the first thing that probably comes to your mind are stories of Roswell, New Mexico,  Travis Walton or Betty and Barney Hill. These stories are larger than life and have forever imprinted their presence in the minds of skeptics and believers alike. In my home state we have our own stories, stories that you may have never heard of. On December 9, 1965 in a small town outside of Pittsburgh, Pennsylvania, the residents would share their own experience, an event that would later hold the nickname of “Pennsylvania’s Roswell.”

On December 9, 1965 Robb Landy raced his bike down a street in Kecksburg, PA blanketed by the sunset. He was nearly half a block ahead of his brother Ray, and whether he knew it or not, he wasn’t going to let him win again. Robb eventually slammed down his bike pedal engaging his rear brake, sending his bike sliding across the pavement leaving a dark streak of burnt rubber.

When Ray finally made it to Robb’s side, he watched as his brother tipped his head back and proceeded to stare intensely at the sky. “What are you doing?” Ray questioned turning his head, and now locking his eyes on the object as well.

Robb and Ray Landy would later give statements describing the object they had seen soaring across the sky of Kecksburg, PA on December 9th, 1965. Robb stated, “You knew what an airplane looked like, you knew what a helicopter looked like, and that didn’t look like anything we had ever seen before. And the angle that was coming in, I mean, you knew that it had to hit the ground.” His brother Ray would state, “We were riding up the road and we just happened to look up into the sky and we saw this thing coming over the tops of the trees. It glided right across the sky, like across the horizon of the trees. We were just, like, in awe, you know, as we watched it. Then it disappeared, and we ran.”

Robb and Ray Landy would not be the only ones to lay their eyes on this strange object that night. Shortly after and only a few miles away another local boy by the name of Randy Overly would have his own experience with the object. Randy was playing in a creek bed this evening, when a deep hissing noise startled him, breaking his concentration. Randy jolted his head towards the sky, in the direction of the noise. Soon he watched as an object flying faster than a plane, no more than 200 ft. above his head soared in his direction. Luckily for himself the object missed him completely and soared onward.

This object eventually made it to the Kalp farm, but by this time it had shifted into what Nevan and Nadine Kalp later described as a "ball of fire." While outside playing they watched it fly over their families farm, crashing into a nearby ravine. Later while Frances Kalp, and her two children gathered for dinner, they were interrupted by the sound of an emergency broadcast explaining that an airplane had crashed in the Kecksburg area. Following this Nevan and Nadine would plead with their mother to call the station to report what they had seen, and she did. Shortly after her reporting and after placing the phone back on the receiver, almost instantaneously it began to ring. When Frances answered, a man claiming to be with the U.S. Navy began to speak, explaining to Frances to “watch the surrounding areas, and we will be there shortly.” Before Frances could say a word, the call disconnected and the operator's voice could again be heard speaking through the receiver.

The night would only get stranger from here on out for the citizens of Kecksburg and for Frances Kalp. Soon after her phone call, her driveway would be illuminated by flashing blue and red lights, and the sound of a fist pounding on the door soon followed. The knock was loud enough to make Frances nervous to answer the door, as if she had done something wrong. What waited for her on the other side was equally as startling. When Frances opened her front door, she discovered two men in black suits accompanied by state troopers. While Frances led the party to the area where she believed the craft had been downed, these men never spoke and intensely observed herself, her movements and dissected every spoken word.

By now, across Kecksburg search parties were being conducted by a combined effort of volunteer firefighters and state troopers. One party was led by local volunteer Jim Mayes. Jim had noticed from an overlook what he would describe as “blue flashing lights” in the area of the ravine, he knew this light wasn’t searchers, these lights were “real bright blue, like an electric welder.” James Romansky, another local volunteer, would be part of a small group that would find this downed unidentifiable object. Himself and the other members of his group knew immediately that this was not an airplane or even a part of one. James thought to himself, This doesn’t even look like it's from this world!, and I'm sure the others shared this same opinion.

James Romansky later described this found object as “a humongous metal object” stating that it was “half buried into the ground.” The circumference of this bell shaped or later referred to as an acorn, was 8ft, it also stretched to a length of 12 feet long. Across what James described as the bumper portion, included engraved writings that looked very similar to Egyptian Hieroglyphics. They were a mixture of what he described as circles, lines and stars.

Before James Romansky and his small group of volunteers had any longer to study this “acorn” two men in black made their way to the crash site, demanding they leave instantly, explaining that this was now a military operation.

Later on a local farmhouse owned by Lillian Hayes would be commandeered and used as a headquarters for this operation. 19 year old Bill Weaver, among many other citizens of Kecksburg while trying to get a look at what they believed the government was trying to cover up, would bear witness to a “van-type truck” pull up. Men in “moon suits” would exit the vehicle, retrieve a light colored box about 5 sq. feet in size and carry it down into the ravine. What could they have possibly been after? This box could not contain the downed object described earlier by James Romansky. Is it possible that this box was not intended for the object at all? Was it meant for an object within, or someone within?

James Romansky believes he saw this object again later the same night after returning to the local firehouse. He watched as a military convoy passed through with a flatbed truck holding a covered object bearing resemblance to what he saw in the woods. 10 year old John Hays, son of Lillian saw this same object passing through on the back of the same flatbed truck. It is unknown what exactly happened to this object after the night of December 9, 1965, but the mystery surrounding this event has forever been stuck in the minds of Kecksburg citizens and famous Ufologist Stan Gordon for years to come. It is said that Stan Gordon believes that the government knows exactly what this flying object was and that the Air Forces official claim that it was more than likely a meteor is completely far-fetched. Stan Gordon would state about the event, “Either were dealing with a foreign highly advanced space probe” one that would have been very highly technical for what was known about in 1965, or “there is the possibility that we may have been dealing with an extraterrestrial spacecraft.”

To learn more about Kecksburg and Stan Gordon's research, check out this movie:

In 2021 Dylan formed Creepy Unsolved Media. Adding two more podcasts to his newly found network. "Midnight In The Mountains" and "After Dark" 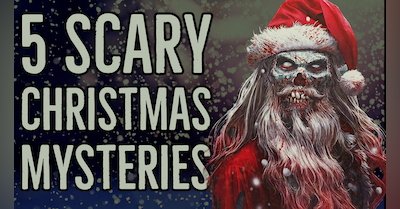 Christmas is a time that is filled with wonder, joy, and quality time to spend with family and friends. With each holiday season and the feeling of &ldqu… 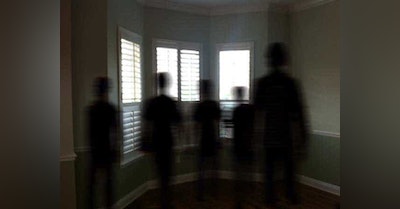 My Lifelong and Ever Evolving Relationships With Shadow Pe…

For as far back as I can remember, shadow people have been a part of my life. My earliest memories of having convulsions and seizures either randomly or …