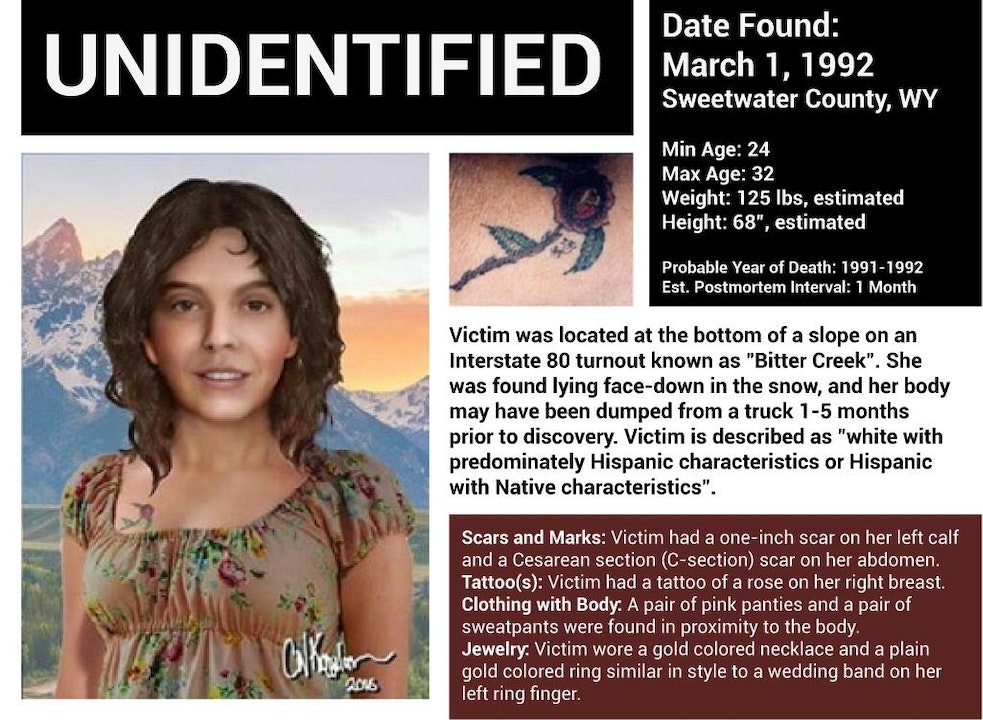 Truck driver Barbara Leverton was making her way down Interstate 80 on the morning of March 1st 1992. For Barbara, this was just another day on the job. She pulled into a lay-by near Bitter Creek in Wyoming for a small break and to change her fuel tanks. As she hopped out of her cab something caught her eye. At first, they looked like bags of rubbish at the bottom of the embankment, but the longer she stared, the more intense the uneasy feeling in her stomach became. Barbara sensed that something wasn’t quite right and went in for a further look. As she leaned in, she discovered that the rubbish bags was in fact the nude body of a woman.

Barbara, being a trucker, had access to a CB radio and didn’t need to travel to use a phone. She jumped back into her cab and called her fellow truckers to action, asking them to contact the police on her behalf. Luckily for Barbara, it was early in the day and there were plenty of people active on the CB radio frequencies and soon the Sweetwater Sheriff’s Office arrived at the scene. Her body was transported back to Sweetwater County Coroner’s Office where her autopsy was performed.

The Coroner found that the woman was a White and Hispanic female between the ages of 24 and 32 with black/brown hair and brown/black eyes. She stood at 5’8” and was 125 to 130lbs with a cesarean section scar on her lower abdomen and a small scar on her left calf. Doe had been found naked with a pair of pink knickers and a pair of sweatpants nearby. She wore a gold necklace and a gold wedding band on her left ring finger. The coroner also noted that Doe had a tattoo of her rose on her right breast and investigators hoped that this detail would generate leads that would eventually lead to her true identity.

Her death had been a violent one with the coroner noting that an ice pick or similar object had been forced into her left nostril and had penetrated the sphenoid bone. The coroner also found evidence of strangulation and trauma to her face, jaw, anus and vagina, indicating that she had also been sexually assaulted and beaten. Despite numerous efforts, the Sweetwater County Sheriff’s Office has been unable to identify the woman and she has become known as “Bitter Creek Betty”.

Soon after Doe’s discovery, a tip came in about the tattoo with the tipster believing that it had possibly been done by an artist at a tattoo studio in Tucson, Arizona. After investigating this lead, the Sweetwater County Sheriff’s Office found the studio and artist responsible for the tattoo, with the studio being located near the Triple T Truck Stop. The artist underwent hypnosis and recalled that the woman wore a brown peasant dress with yellow flowers on it and spoke without a distinctive accent. Whilst he was unable to remember her name, he did remember that the woman was a hitchhiker.

In 2014 there was a major break in the case when DNA obtained from Betty’s crime scene matched with DNA found at the crime scene of another Jane Doe just miles away. On April 13th 1992 a woman who is only known as “The Sheridan County Jane Doe” was found under similar circumstances. Sheridan Doe had been beaten and her cause of death is listed as blunt force trauma to the head. Their killer left behind his DNA at both crime scenes and years later this was used to link their cases together, confirming their suspicions that they had a serial killer on the loose.

The Sheridan County Jane Doe is described as a white female between the ages of 16 to 21, 5’5”, 110 to 115lbs with brown sun-bleached hair and unknown eye colour. She was found wearing a light blue and white check midriff shirt which was tied beneath her chest and had several buttons running down the middle. She also wore a 38C light blue lacy bra, size 5-6 blue jeans, a wide white plastic belt with a silver buckle and pink bikini-cut knickers.