3 Creepy Photos And Their Disturbing Backstories 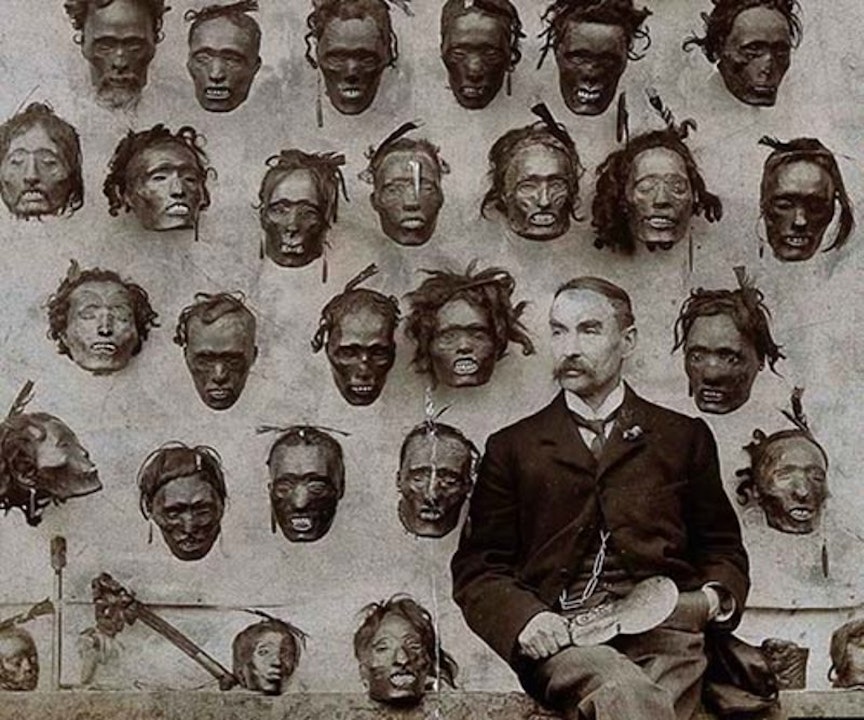 We have all heard the phrase "a picture is worth a thousand words," but have you ever thought about the tales that these thousand words might tell? What you will find below are some of the creepiest pictures ever taken, and if these pictures could talk this is what they would say!

You might be asking already what exactly is a feral child, so let me explain. A feral child is also referred to a "wild child" describing any human child that has lived completely isolated from human contact including care, behavior and human language from a very young age. These children might have been abandoned all together or became separated from society after escaping from abusive parents. They are also popularly believed in some stories of folk lore to be raised by animals! Where I come from we have a story about a feral child by the name of "wolf boy." Wolf boy bounced out of the back of a covered wagon back in the 1800's and was... well he was raised by wolves!

On November 4, 1970 a young mother who was partial blind, accompanied by her 13 year old daughter would visit the Los Angeles county welfare office seeking help. The social workers at this welfare office were at loss for words, not because of the mothers requests, but because of the conditions of this young girl. This girl, who would later become know as "Genie" could not stand up straight and walked hunched over in a movement that would later be described as a "bunny walk." Genie was extreme small and frail and did not look her age at all. Upon first glance one would have guess she was six or seven years old.

It would later be discovered after she had been admitted to the Children's Hospital of Los Angeles, that her conditions were worse than initially recognized. Genie was unable to chew, had extreme trouble swallowing, she was also mute and incontinent. Further tests would show that Genie had the maturity and mental capacity of a one-year old.

So how did Genie end up in such horrible conditions? Well what I am going to tell you next is completely disturbing and horribly sad. Prior to Genie being discovered at age 13 years and 9 months old, she had been keep isolated in a small room within her home since 20 months old. She spent most of her days naked, feet and hands bound and tied to a potty chair. She was completely cut off from the outside world, only feed cereal and baby food. The only means of communication she ever received was when her father or brother would growl and bark at her. If Genie ever tried to speak to them or respond in anyway she was physically beaten.

The Maori are the indigenous people of New Zealand, and they are well known for their traditional face tattooing known as Moko. These face tattoos, because of their high price, were generally only given to men of high-rank with in the community, and served as a connection between the individual and their ancestors. These Moko tattoos were very detailed and contained personal information, including rank, tribe and lineage. In the 1860's a man serving in the British Army during the New Zealand Land Wars, would become highly interested in the Maori and their face tattooing, and not just for their interesting designs.

Major General Horatio Gordon Robley being a talented artist, was absolutely intrigued by the face tattooing the Maori performed. He would even go on to publish a book that included his sketches of these tattoos, but this wasn't what made him the big bucks. From Robley's time spent with the Maori, he would discover that when someone with Moko died, they didnt simply discard of this artwork. Instead the Maori people would remove the head and preserve it. The eyes and brains would be scooped out and then all of the holes were filled with flax fiber and gum creating a perfect seal. Following this the head would be boiled, smoked and left out in the sun to dry. Finally it would be treated with shark oil and gifted to the tribesman's family to be put on display in a decorative box.

Men like Robley would decide that this was cool as shit and decided that they would trade whatever they had, mainly firearms for one of these heads. This would create a huge demand for these heads, known as Mokomokai, and in return the Maori people would raid neighboring villages to get more. By the end of Major General Horatio Gordon Robley's time spent in New Zealand he would walk away with 35 of these trophy heads.

Just a man and his Dolls

Anatoly Moskvin based off his bio would be what one might consider an extremely smart and adventurous individual. Anatoly absolutely loved history and taught at a college level. He also spoke 13 different languages! Yes 13 that sounds unbelievable, I don't know if I can even think of 13 different languages! His wide range of speak able languages might compliment his time spent traveling extensively, when he wasn't writing as a journalist in Russia's fifth-largest city, Nizhny Novgorod.

With all that aside Anatoly Moskvin did have a strange obsession with cemeteries, and was a self proclaimed "necropolyst." His obsession with cemeteries and the dead started when he was 13 years old in an incident he was involved in, in 1979, a story he would later share in Necrologies, a weekly publication that he was a avid contributor for. The story goes that when he was 13 he was stopped by a group of men in black suits on his way home from school. These men were on their way to an 11 year old girls funeral by the name of Natasha Petrova, and they made Anatoly go with him. They forced Anatoly to kiss the girl's corpse over and over, when he was done the girls grieving mother placed a wedding ring on his finger and one on her deceased daughters, marrying the two of them. Like what the F***!

In 2011 after years of desecrated graves had been showing up in Anatoly's home city of Nizhny Novgorod, Police had a good idea who might be involved. Police would visit 45 year old Anatoly, who at the time lived with his parents in a small apartment. What the Police found in this apartment surely still haunts them today. Police found 26 life-sized-dolls. Anatoly Moskvin had been taking bodies of the deceased and mummifying them turning them into his own personal doll collection.