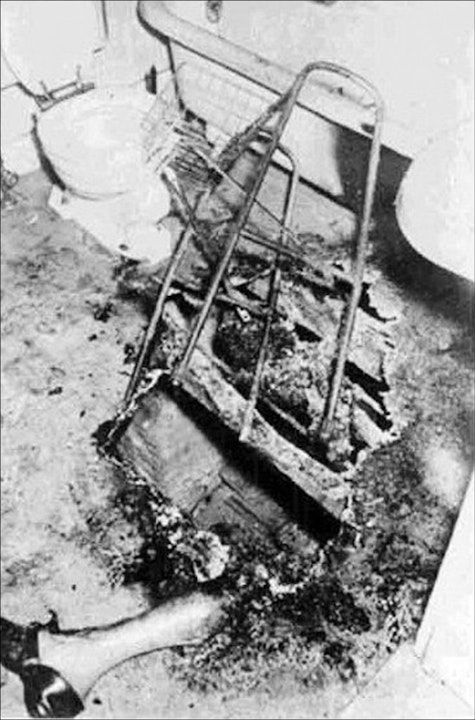 Growing up this thought crossed my mind a handful of times, "Spontaneous Human Combustion." There were brief conversations here and there, and every once in a while the name Dr. John Irving Bentley would roll off some ones tongue followed by very little reaction, if any at all. Why is Dr. John Irving Bentley significant to me? and, What in the world is "Spontaneous Human Combustion?" Find out below as we cover the brief history, and some famous cases surrounding it!

Spontaneous Human Combustion(SHC) is defined as, the idea or concept of the combustion of a living human being without a clear external source of ignition. So in a nutshell you burn from the inside, unannounced without any apparent reason. So now knowing this, the next time you get heart burn, I guarantee you will get goosebumps.

If you are anything like me, you are wondering where SHC first presented itself and burnt its way into history. In 1746 a man by the name of Paul Rolli first presented this term and idea in an article publish in the Philosophical Transactions. Okay that doesn't tell you much, does it? Anyone can throw out strange and bizarre ideas and have them publish, we see this all the time, we live in the age of the internet and social media. Let me explain. Paul Rolli wrote this article in response to the unexplainable death of Countess Cornelia Zangheri Bandi.

Countess Bandi was an Italian noble woman born on July 20, 1664 and died mysteriously on March 15, 1731. On the day of her death Countess Bandi seemed normal, but in the evening she grew heavy and more tired than usual. Following supper she retreated to her bedroom accompanied by her maid where she would spend the next three hours carrying on a conversation with her, before saying some prayers then falling asleep.

The next morning after the Countess did not awake at her normal time, the maid grew concerned and visited her room. The maid called out to no response in return, doubting any heinous acts had been preformed she ventured across the room to open the window and this is when she saw her Countess... or what was left of her. Four feet from the bed lay a heap of ashes containing body parts of the deceased Countess, including two legs, untouched still in stockings from the foot to the knee, between the feet laid the Lady's head, whose brain, back part of her skull and chin were burnt to ashes.

After the passing of 67 year old Mary Hardy Reeser's late husband she would decide to relocate from her home in Columbia, PA to St. Petersburgh, FL. Like his father, Mary's son was a prominent Physician in the area, and she would find herself living in a fairly new, well furnished apartment, featuring an electric kitchen, twin bed, tiled bathroom, with a garage in an "exclusive" northeast section of the city, located on 1200 Cherry ST NE. The apartment building that she stayed in was named "The Allamanda Apartments" and featured five apartments and one hotel room, although there was extra room Mary would be the only resident besides her landlord Pansy M. Carpenter.

On the morning of July 2nd, 1951 a Western Union boy visited the "The Allamanda Apartments" and spoke with Pansy Carpenter, explaining that he had a telegram for Mrs. Reeser and asked for directions to her apartment. Pansy would tell the delivery boy, don't worry about it, I have to take the newspaper down to Mrs. Reeser, I'll deliver the telegram myself. When Pansy approached Mrs. Reeser's front door she was alarmed, she could feel the heat coming off of it, and it was hot to touch. Pansy yelled out for the Western Union boy for help, but he had already left. Across the street a couple of painters noticed Pansy's cries for help and rushed to her assistance. Two of the painters would end up entering Mrs. Reeser's apartment while Pansy rushed back to her own to call the Fire Department. The first man would visibly see Mrs. Reeser's bed from the door way, no one was in it but he could tell it had been slept in. The second man entered the apartment and walked through it, on his way out he noticed the remains of Mrs. Mary Hardy Reeser.

He would later explain to investigators that when he entered the apartment he saw little signs of a fire, but a lot of smoke. He also stated that all he could see of Mrs. Reeser's body was her leg. Laying among a pile of ash, and all that remained of Mrs. Reeser was a single leg in a black slipper.

The local Fire Chief was completely stunned by what he discovered at the scene and the following facts were released to the papers. The area that Mrs. Reeser's body was found was hot enough to destroy her body, but left the paint on the wall untouched. It was not scorched or even cracked. The living room rug was burnt only beneath the chair and body of Mrs. Reeser. Also he noted that outlets a few feet away on the lower part of the wall were still intact and working fine, and the wall mounted gas heater and the electricity in the kitchen were both off.

This case of SHC comes from my home town of Coudersport, PA. A small town with a population of around 2500, and is located in the dense forests of Potter County surrounded by great hilltop plateaus of the Allegheny Highlands. Growing up I heard this name tossed around from time to time, Dr. John Irving Bentley and I was told that this case is talked about in a popular song, Pardon Me by Incubus. If you read through the lyrics today you will find this line, "Not two days ago, I was having a look In a book and I saw a picture of a guy fried up above his knees I said I can relate, because lately I've been thinking of combustication." On March 14, 1997 this case would even make an appearance on Unsolved Mysteries.

On December 5, 1966 Don Gosnell was making his daily rounds. He was a gas meter reader for a local gas company, named the North Penn Gas Co. He was also very familiar with the small communities he worked with in. He commonly let him self in to the Dr. Bentley's home, an agreement made prior between himself and the doctor, to check his meter that was located inside the basement. On this day Don Gosnell made his way into the basement to check the meter, and he couldn't help but notice a strange smell. It was almost "sweet-like" and it reminded him of "a new oil burning central heating system." Also accompanying this strange smell was a light blue colored smoke. As he looked around curiously he almost stepped in a neat pile of ash lying on the floor, sitting about 15 inches in height. Trying to decide where this pile of ash had come from, Don Gosnell ended up looking up. Here he noticed a hole about 1 square foot in the floor board above, and was very concerned so he decided to go upstairs to investigate.

When he made it upstairs, he would begin to call out for Dr. Bentley, and when he reached Dr. Bentley's bedroom he was overcome with a cloud of smoke. Don Gosnell pushed his way through this cloud of smoke, and once he reached the other side he couldn't believe his eyes. There laid the remains of Dr. Bentley. In a panic Don Gosnell rushed back to the gas companies office, and exploded through the front door shouting "Dr. Bentleys burned up!" Later his colleges would explain that Don Gosnell looked "white as a sheet," and with good reason.

This would be reported to the local police department, and they too would share the shocking discovery of Dr. Bentleys remains. In the bathroom of Dr. Bentley's house Police discovered the doctors leg, the rest of his body had been burnt to ash. Oddly enough his nearby walker and bathtub were unaffected. Dr. Bentley had burned to ash, and this fire was selective enough to only burn himself and the floor beneath his feet. Since Dr. Bentley was commonly know for being a active pipe smoker, theories described him accidently catching himself on fire while smoking, but his pipe was found still on his bedside stand unlit. The coroner would be completely baffled by this case and ultimately record a verdict, that Dr. Bentley died by asphyxiation and 90% burning of the body.